Crew 1/Long Hair Don’t Care, Greys River District, Bridger-Teton National Forest, July 25 – August 3 – Crew 1 was in one of the most beautiful parts of Wyoming near the Greys River outside of Alpine. Most of the work involved buck and rail fencing enclosures to keep the cattle away from the water and trails. Thanks for the help of some forest service hotshots staged nearby, the old buck and rail fence the crew was replacing was deconstructed by the firefighters days before saving the crew days of less-skilled work. The crew also worked on rerouting the Deadman Lookout Trail.

Education Day – The crew met up with a Montana Conservation Corps Youth Crew to go on a hike with forest service employees learning the local flora and fauna. Once the crews split up to their respective camps, our crew learned more from our contact about USAjobs.

Day Off – Since the crew was in the area, Long Hair Don’t Care took off to Grand Teton NP! After a day in the park, the crew ate pizza in Jackson, WY and watched the Steel Drivers live and for free! 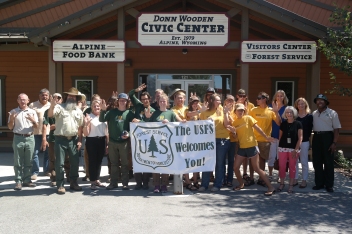 Crew 2/Thad/Mad, Canyon near Newcastle, WY, July 25 – August 3 – This crew continued a 4-year project with the BLM to reduce fuels around ancient pictographs as old as 11,000 years old. According to our site contact, Alice Tratebas, an expert archeologist in the field, worked alongside our team constructing slash piles and felling trees. We also worked on some fence keeping cattle out of the canyon to better preserve the ancient art. Our crews participated in preserving artifacts in a canyon that had been used for herding game for 10,000 years or more by ancient Native Americans.

Education Day – It is hard to pick one day out of the 10 to be specific to education. The crews would work 8 long hours or so and then head over with Alice to examine more examples of ancient rock art learning about what the symbols mean and what those symbols tell archeologists like herself about these ancient people.

Day Off – The crew headed to Custer State Park to hike, relax, and scope out some caves. 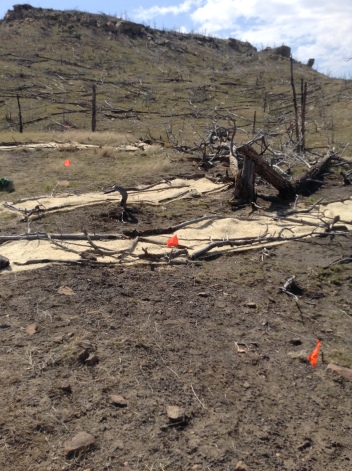 Crew 3/Baby Geniuses, South Pass City, WY, July 25 – August 3 – The Geniuses built trails around the old city of South Pass working with Wyoming State Parks and Cultural Resources. They built rock walls, a staircase, and felled a good number of trees. The trail takes visitors on a journey both through history and nature in this wild town famous as the gateway to The West during nineteenth century westward migration. The pass was also known to be used by Native American groups for centuries.

Education Day – If you have not been to South Pass City State Historic Site and checked out the historic goldmine tour, you are missing out! Our crews too the day exploring the mine they have been building trails around. A good time by all.

Day Off – After days in the hot sun in South Pass, the crews headed over to Lander, WY’s City Park and Sinks Canyon State Park to relax and explore more caves.