Crew 1 – BLM land east of Buffalo, WY, August 7-16 – Pulling weeds ain’t easy but it is some of the most important work we do. Thanks for funding and coordinating from Devon Energy, this crew worked with the BLM outside of Buffalo, WY to remove bindweed, houndstongue, and thistle as well as invasive grasses and alfalfa. After 11,500 square feet of ground covered and managed, the crew cleared 600 feet of corridor for a beginner/kids mountain biking trail on top of repairing a barbwire fence gate.

Education Day – As is tradition, the crew toured a Devon Energy active drilling site where the team put on blue FR jackets and learned about the process used to produce these resources.

Day Off – This crew spent their day off in Sheridan walking around downtown and enjoying some downtime in city parks.

[this crew did not give us their pictures]

Crew 2 – The Nature Conservancy (Cody) at Hillberry Ranch, August 7-16 – The crew made the long drive up to the Big Horn Basin to Hillberry Ranch to continue a previous crews’ work on fences. They removed miles of old barbed wire to make room for more wildlife-friendly fences to come. They even built new fence AND accomplished nearly 2 miles of trail improvements up the Heart Mountain trail.

Day off – They got some tubes and floated the Shoshone River and afterword walked around Cody. 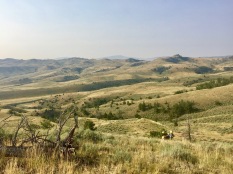 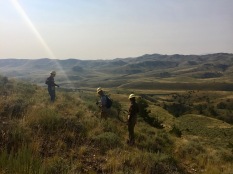 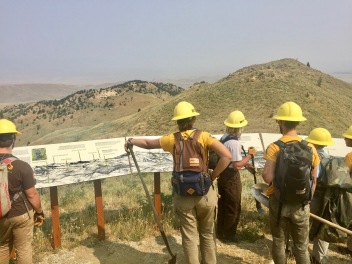 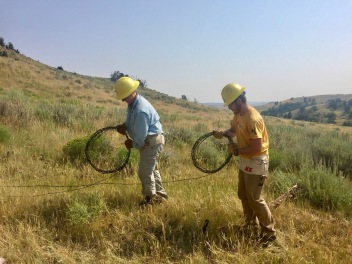 Crew 3 –  Duncan Ranch, Aug 7-16 – The crew continued breaking new trail where the two previous crews has worked last hitch. They widened the trail to be ready for equestrians, did more rock work, and built some new trail.

Education Day – Like the last two crews, they headed to one of the coolest museums in the West, Casper’s Wyoming Trail Center. This museum helps contextualize westward migration in the nineteenth century.

Day off – Back to Casper, the team hung out at the YMCA for a shower, then went to mini-golf, and capped the evening off with Pizza Ranch. 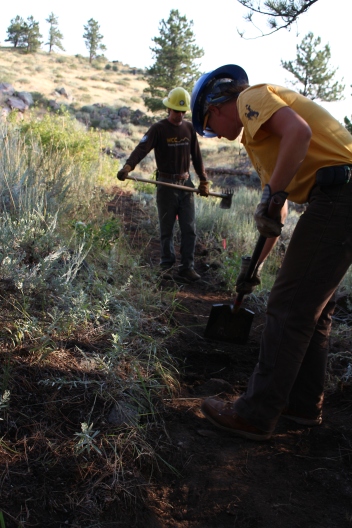 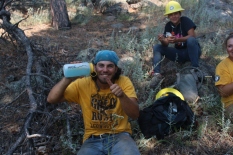 Crew 4 – Antelope Butte Foundation, August 7-16 – The WCC was especially excited to partner with the Antelope Butte Foundation in the Bighorn Mountains. The Antelope Butte Ski area closed in 2004 but during the last few years a non-profit group has organized with the goal of opening an all season mountain recreation area. WCC was able to participate in this effort mapping and clearing 11 miles of trail at the base of the mountain. The team also cleared about 60 acres of ski runs of small diameter trees that had grown since 2004. The only problem… it rained every day. These folks are troopers.

Education Day – Antelope Butte Foundation staff came out and explained the importance of the work our members were performing. Our work will help to bring more recreational opportunities to the Bighorn Mountains which makes for healthy people and improves the local economy.

Day off – They headed into Sheridan and hung out in the parks and downtown.

WyVTC – Curt Gowdy and Cheyenne North Park, August 14-24, 2017 – To finish up the season, the crew came back to Gowdy to finish up the North Shoreline Trail (a little more mile-long loop) as well as felling hazard trees near the more back country parts of the job. They even headed up to Glendo State Park to assist the park with parking for the Eclipse.

Education Day – The crew put the tools down and headed to the Capital to MEET THE GOVERNOR and received a personalized letter from Gov. Matt Mead himself. Afterwards, they got a private tour of the Historic Governor Mansion (State Historic Site). 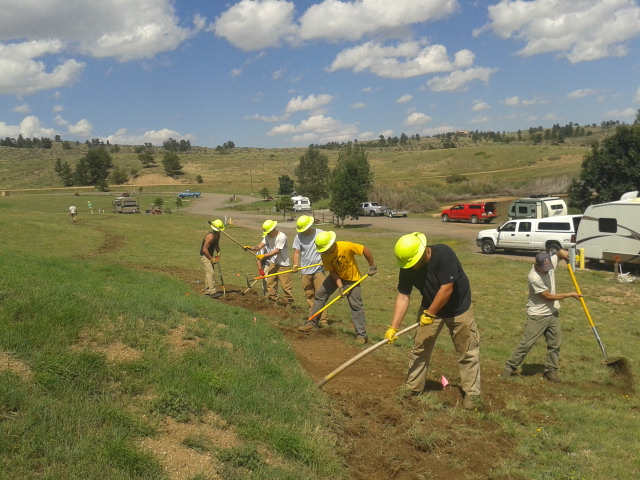