Crew 1 spent a majority of their time spraying 6 acres of the park to help with the eradication of leafy spurge, an invasive species present amongst most of the park. The spraying was followed by a few days of painting and staining the facilities present in the park. They rounded out their work with some clearing of beetle kill pine that was gathered up and bundled for firewood!

The crews education component consisted of a visit to Popo Agie Falls with the Parks Superintendent, where he taught them all about the lush vegetation present in the canyon.

The Crews off day was spent at Worthen Reservoir, were they took a hike down Sheep Bridge trail and went for a swim. 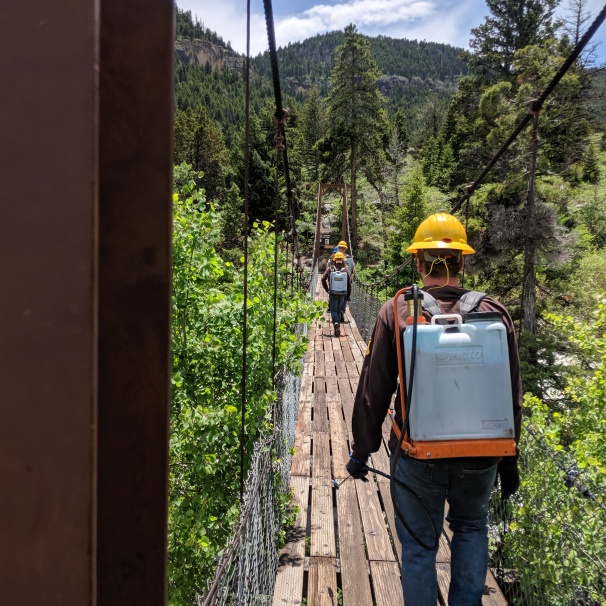 This Crew spent their time removing climatus vine, an invasive species that roots itself around cottonwoods and other trees eventually cutting off their water supply and killing them. Along with the removal of the vines the crew worked to remove any deadfall the could further promote the spread of the vine!

The Crews educational portion consisted of visiting some various sites throughout the Big Horns, including dinosaur tracks and Shell Falls. The crew also had the opportunity to learn about the forgeable plants in the area!

For the crews off day they visited Cody, WY! 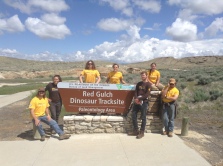 This Crew spent time at both Hot Springs State Park and Buffalo Bill State Park. Their time at Hot Springs State Park was spent rebuilding and painting the rocks on the hill that spell out “WORLDS LARGEST MINERAL HOT SPRING.” While at Buffalo Bill the crew worked to put in new tent pads at one of the campgrounds the work consisted of putting in box frames and then filling them with sand.

For the Crews educational component they visited the Buffalo Bill Center in Cody, WY.

On the Crews off day they went to Yellowstone!

A majority of the VTC’s time was spent remediating trails and completing general trail maintenance. Most of the work consisted of adding retaining walls, steps, and ramps to bring the trail up. 21 ramps and steps added to existing trails and 19 retaining walls; all done with rock. They also added in a timber retaining wall along the critical edge of a trail.

The crews education portion was a hike to Hidden Falls, to further explore the area.

On the crews day off they canoed at North Crow Reservoir.