Crew 1 spent their time building and repairing a wildlife friendly let down fence for seasonal migration in the Bridger Teton National Forest outside Alpine, WY. They also helped to clear out a trail and supply some firewood to the Deer Creek Ranger Station.

On the crews off day they explored Grand Teton National Park before getting some pizza in Jackson, WY. 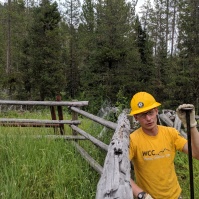 Sponsored by: The Nature Conservancy

Crew 2 built Artificial Beaver Dams (ABD’s) along Red Canyon Creek and Barret Creek, the dams were constructed with willow limbs and rock. The goal of these dams are to help restore the stream with higher sediment levels and to aid in bringing beavers back into the area. Smaller dams were also constructed around the larger ones to help aid in recovering previously established wetlands.

For the crews educational component their contact with The Nature Conservancy took them on a tour of Red Canyon Ranch.

For the crews off day they went to the Wild River Fest in Lander before going up Sinks Canyon to hike around.

Crew 3 spent their time converting fence to wildlife friendly on BLM land near Muddy Mountain. The project was funded by Devon Energy in an effort to help with reclamation on the land. The crew converted some fence, tore some down, and even cleared Juniper in some areas to help recover Sage Grouse populations.

For the crews educational component they had the opportunity to tour a drilling rig and learn about Devons efforts in conserving and reclaim the land after rig become inactive.

For the crews off day they went to the Casper Rec Center before taking a stroll through downtown. 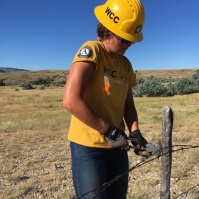 During the Veterans final hitch they traveled to Brooks Lake in Shoshone National Forest where they built a 300 foot turnpike. The crew began by hauling 4 timbers into the work site 2.5 Miles. They then peeled 20 logs and set them in place with rebar. Finishing off the turnpike they hauled in dirt and crush to raise the tread up to the height of the logs.

For the Crews off day they traveled to Yellowstone National Park. 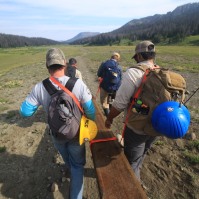